Public Opinion - Extracts: The Making of a Common Will

Walter Lippmann published Public Opinion in 1922. Following is a short extract describing the role of leadership in creating public acceptance. The entire book is available online for free through Project Gutenburg.


The established leaders of any organization have great natural advantages. They are believed to have better sources of information. The books and papers are in their offices. They took part in the important conferences. They met the important people. They have responsibility. It is, therefore, easier for them to secure attention and to speak in a convincing tone. But also they have a very great deal of control over the access to the facts. 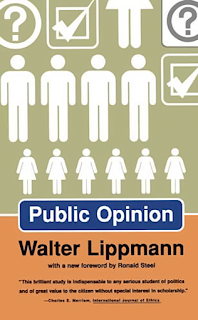 Every official is in some degree a censor. And since no one can suppress information, either by concealing it or forgetting to mention it, without some notion of what he wishes the public to know, every leader is in some degree a propagandist.
Strategically placed, and compelled often to choose even at the best between the equally cogent though conflicting ideals of safety for the institution, and candor to his public, the official finds himself deciding more and more consciously what facts, in what setting, in what guise he shall permit the public to know.
That the manufacture of consent is capable of great refinements no one, I think, denies. The process by which public opinions arise is certainly no less intricate than it has appeared in these pages, and the opportunities for manipulation open to anyone who understands the process are plain enough.
The creation of consent is not a new art. It is a very old one which was supposed to have died out with the appearance of democracy. But it has not died out.
It has, in fact, improved enormously in technic, because it is now based on analysis rather than on rule of thumb. And so, as a result of psychological research, coupled with the modern means of communication, the practice of democracy has turned a corner. A revolution is taking place, infinitely more significant than any shifting of economic power.
Within the life of the generation now in control of affairs, persuasion has become a self-conscious art and a regular organ of popular government. None of us begins to understand the consequences, but it is no daring prophecy to say that the knowledge of how to create consent will alter every political calculation and modify every political premise.
Under the impact of propaganda, not necessarily in the sinister meaning of the word alone, the old constants of our thinking have become variables. It is no longer possible, for example, to believe in the original dogma of democracy; that the knowledge needed for the management of human affairs comes up spontaneously from the human heart. Where we act on that theory we expose ourselves to self-deception, and to forms of persuasion that we cannot verify.
It has been demonstrated that we cannot rely upon intuition, conscience, or the accidents of casual opinion if we are to deal with the world beyond our reach.
Newer Post Older Post Home