Since the January 06 Insurrection, "Q Shaman" has come to represent the universal social reject Trump supporter.

But if you believe Q Shaman types are the most destructive Trump allies, think again. 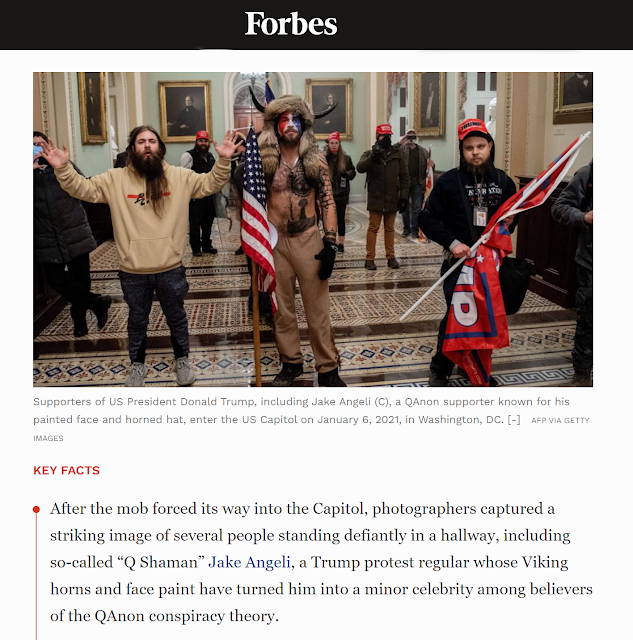 Stephen Schwarzman, CEO of The Blackstone Group, a global private equity firm, is a loyal Trump (Sha)man who conjures wealth and all the power it can buy .

The NY Times profiled his skill at profitable equivocation in this article.
In Trump, Stephen Schwarzman Found a Chance to Burnish His Legacy
If you can't get beyond the paywall, there is an excerpt below the image. 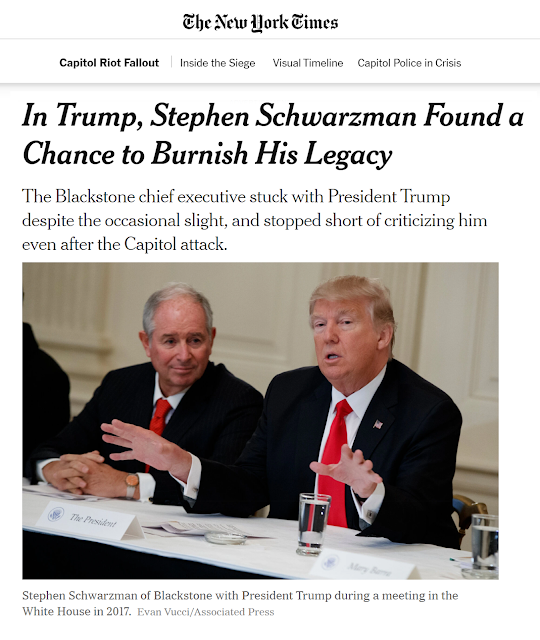 (Excerpt from the New Times Article by Kate Kelly)

On the morning of Nov. 6, 2020, Mr. Schwarzman joined about 25 chief executives, academics and others on a call to discuss the election results. Though votes were still being tallied, Joseph R. Biden Jr. appeared to have won. Mr. Trump was challenging the results.

Timothy Snyder, a Yale professor who had written a book titled “On Tyranny,” likened Mr. Trump’s actions to a coup d’état.

To Mr. Schwarzman, the notion appeared absurd. “This has been a tough time,” he said, according to a participant who shared details from a transcript of the call. Both the media coverage and the polls had misled people, Mr. Schwarzman said, and as a result, “people generally are skeptical about what anyone’s telling them.”

He argued that the vote counts, which were continuing days after the election, had created a perception problem, especially in places where Mr. Trump appeared to have an early win only for a Biden victory to be declared later. His comments didn’t sit well with some attendees.

“It was 100 percent known in advance that this was exactly what would happen in a place like Pennsylvania,” replied Richard H. Pildes, a constitutional-law expert, according to the participant who had the transcript. Kenneth Frazier, the chief executive of Merck, added that Mr. Trump’s actions were undermining democracy and should be of great concern, recalled attendees.

After Mr. Schwarzman’s comments were leaked to The Financial Times, some Blackstone investors began raising questions, say employees briefed on the calls. Staff members of pension funds, which invest with Blackstone, had previously told the firm’s officials that they wished Mr. Schwarzman would stay away from politics. Now, one pension wanted to know more about what he had said to the other executives and why, and another complained that they didn’t like what they were reading, two Blackstone employees said.

Even as he found himself ensnared in controversy, Mr. Schwarzman declined to criticize the president. It took him until Nov. 16 — more than a week after the election was called by networks — to acknowledge the win at an economic forum. (“It looks like Joe Biden,” he said.)

As Mr. Trump refused to concede, Mr. Schwarzman declined to sign a Nov. 23 letter in which more than 160 chief executives demanded a transition of power. Instead, he issued his own statement that “the country should move on,” adding that “I supported President Trump and the strong economic path he built.” (Jon Gray, Blackstone’s president and a big supporter of Mr. Biden, signed the group letter.)

According to Private Equity International's 2020 ranking of PE firms, Blackstone not only occupies the top spot among global PE firms, it is "mega-funds ahead of the competition". Maybe it's pure luck. Or maybe it's who they...well, you know. 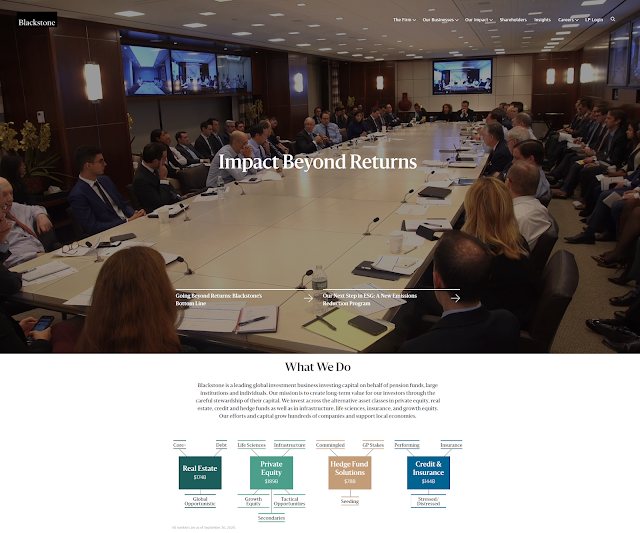 That prominent Impact Beyond Returns slogan is a perfect fit for one of Blackstone's most high-profile impacts, Blackstone Launchpads.

As a project of the Blackstone Charitable Foundation, Launchpads are situated in state college business schools across the country. Ensconced in targeted and grateful educational communities, Launchpads provide Blackstone with a direct no-oversite way to clone its own workforce and incubate self-serving initiatives with a charitable tax write-off to boot! 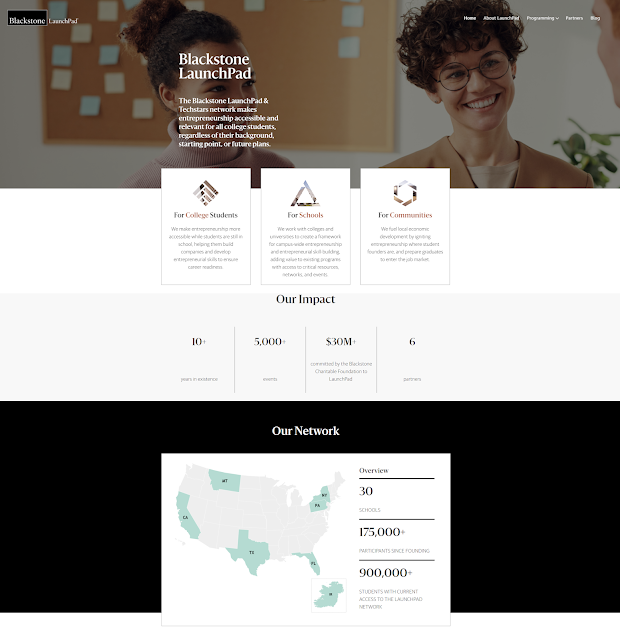 So how did Blackstone manage to become mega-funds ahead of the competition?

In March of 2019, the United Nations Working Group on Human Rights wrote Mr. Schwarzman a personal note about his real estate venture and it wasn't to congratulate him on humanitarian efforts. 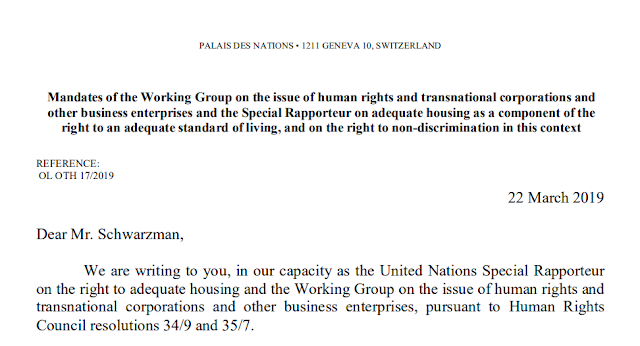 Here is a link to the full text of the letter: United Nations Working Group letter
This is the summary of main points in the letter itself:


We would like you to be aware of our principle concerns with respect to Blackstone’s engagement in residential real estate, from the perspective of human rights.

First, in the aftermath of the 2008 global financial crisis, Blackstone, through its Invitation Homes unit, significantly increased its presence in the residential real estate sector, particularly in the US, by purchasing an extraordinary and unprecedented number of foreclosed single-family properties, which were then converted into rental accommodation. This large-scale ownership has made it possible for single family rentals (SFR) to become, for the first time, an asset class2 and has had deleterious effects on the enjoyment of the right to housing.

Second, Blackstone and its subsidiaries have also been purchasing multi-family rentals (MFR) at unprecedented rates across the world, which is also having deleterious effects on the right to housing.

Third, Blackstone is using its significant resources and political leverage to undermine domestic laws and policies that would in fact improve access to adequate housing consistent with international human rights law.

This is a link to a partial list of retirement funds invested in Blackstone reported by Private Equity International
Here are those named on the first of eight pages:


But Hey! If you're thinking that there must be a successful, ethical alternative for these lowly public pension funds...again, think again.
Apollo Global Management is Blackstone's closest competitor.  And most of these funds are already invested with Apollo. There aren't many sure-fire high-return Global Private Equity options available to struggling public pensions.
Then there is the all too tabloid reality that Apollo's founder/CEO, Leon Black, makes Mr. Schwarzman look considerate and classy by comparison. 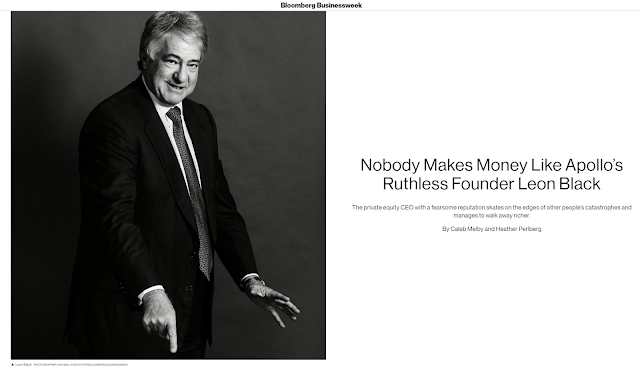 Those Q Anon people aren't the only ones looking for hidden meaning to tell them what's happening. The implied language covering Apollo's home page is so eager to be blatant, no satire could parody its ruthless intent any better.  So many "uncommon challenges, opportunities, paths to value" packed into a pandemic, it certainly will take a "rigorous approach" to maximize all of them! 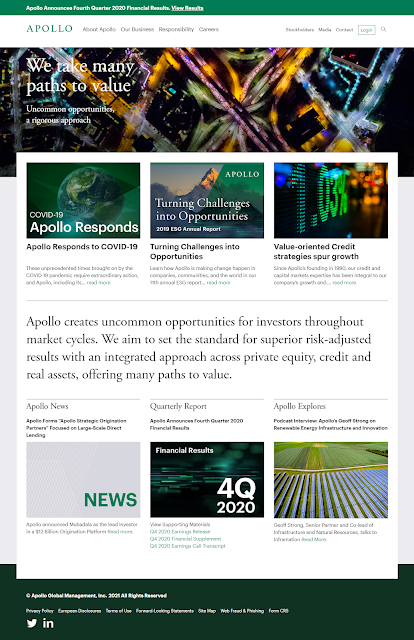 For additional perspective, here is the peak of Apollo's Olympus of Leadership: 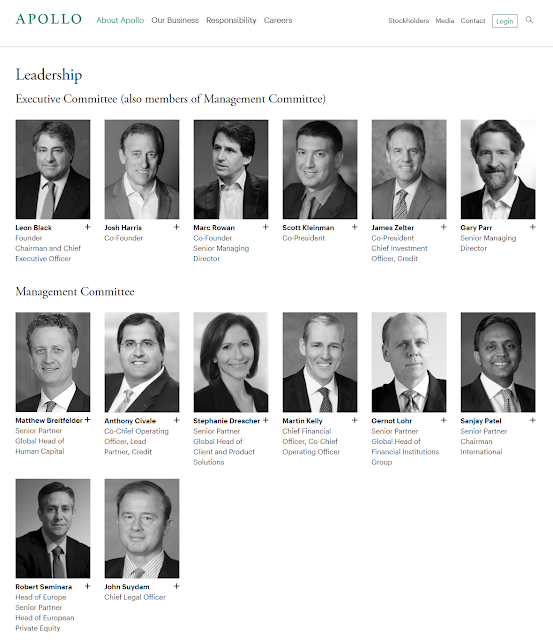 And then there is the satyric skeleton in Leon's closet. 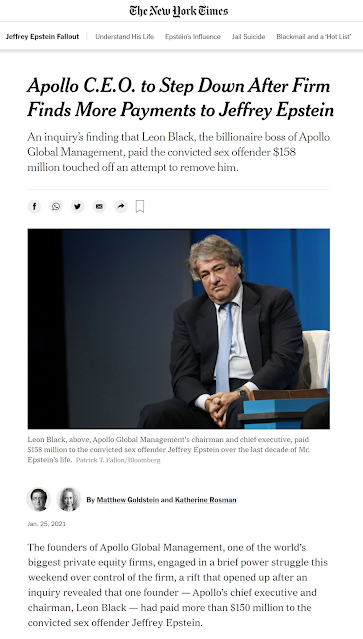 Apollo C.E.O. to Step Down After Firm Finds More Payments to Jeffrey Epstein

At this point, Mr. Black probably wishes HE had some Q Shaman to hide behind instead of a dead pedophile hanging over his head.
Newer Post Older Post Home