(Note: My photos and records of this trip got lost in another life.)
In 1981, myself and two companions, Bob and Mary, decided to weather the first three months of Reagan's presidency traveling the length of Mexico. 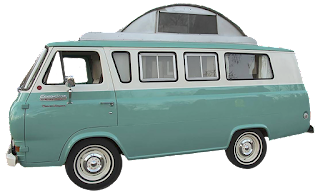 Our transport for the journey was a twenty year old Ford Falcon Van with a camper retrofit.  Its most unusual feature was a pop-up silver tin roof that looked like half of a giant tuna fish can when fully erect. In its own way, it was art.


We planned a route that took us down through the middle of Mexico then back north from Acapulco along Highway 200. Acclaimed for its soaring cliffs, it is now a popular coastal thoroughfare between Acapulco-Zihuatanejo. But in 1981, it was in the planning stage of construction and we heard warnings about road conditions well before attempting it. 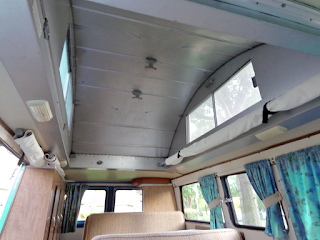 Persevering over many pitted and twisted southern Mexican miles, the Ford Van became more than just a machine to us. Some serious mechanical problems along the way, in fact, opened doors to our most notable adventures.
In Mexico City, an engine belt broke which led us to a family of street mechanics who feed us tacos for two days and charged little, beyond the cost of the belt, for their work.  Hours spent in halting English-Spanish translation made us extended family.


Before leaving, they gave us advice on the route to Acapulco and up the coast to Puerto Vallarta.  Our particular concern was a stretch of 200 between Acapulco and Zihuatanejo.  On the map it was designated as a hundred miles of dirt road. Our mechanic amigos got various reports about conditions but said to check with locals and the military there before proceeding. The military had the most up-to-date information about coastal roads because of frequent drug trafficking.


Entering the Mexican state of Guerrero we came upon the first of many highway stops identified by big wooden hand painted signs that all said “Drog Search”. Staffed by military personnel carrying machine guns, we had entered the frontline of what later became Reagan’s “War on Drugs”.  Searches were under the complete control of whoever happened to be on duty.
We were surprised and relieved to be waived through the first two “Drog” stops. Then on the approach to Acapulco over a steep hillside, wrapped in frail palapas and wooden huts, we were stopped and detained for a thorough investigation.
Nodding at our California license plates, the largest soldier yelled “stop” in English and raised his machine gun as if to fire a warning shot. Another soldier with the heaviest adornment, ordered us to get out of the van. He then splayed himself over the front passenger seat and started chain smoking Marlboro Menthols from our pack on the dashboard. He was setting the scene for a power play.

After randomly scrutinizing our luggage, food items, visas and auto insurance, we were probed for some hidden purpose to our trip.  His interrogation tactic was to maintain an intense glare, blow Marlboro smoke out his nose, and slowly repeat “Do you have drogs?”. It felt like stumbling onto the set of a Fellini movie. But the guns were real so we maintained respect while hinting to each other about options for bribery.


Leveraging his fondness for Marlboros, we gave our interrogator a whole carton, thus achieving a low level of camaraderie.  He then seemed pleased to offer his opinion about the coastal route, though there wasn't much new to hear. He told us to turn around and go the way we came.  He said the coastal road was nothing more than rocks and mud, bisected by a river without a bridge.  Only specialized military vehicles routinely made it through.  Our old tuna can van would not have a chance.


In a final warning to turn back, he made broad “negative” gestures, shaking his head and hands while grumbling about “el mal rio, horrible, peligroso”. Despite dimmed prospects, though, we decided to do more research. After adding a John Denver cassette tape to our bribery gifts, the Marlboro man released us from the “Drog Stop” and we continued the last few miles into Acapulco. 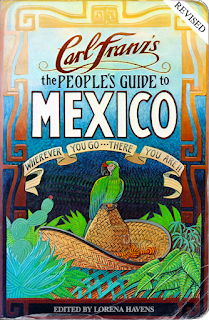 In contrast to the poor and crowded conditions on the mountainside, Acapulco was a gleaming economic fortress of high rise hotels guarding the sweep of an azure blue bay. We found a camping spot in a resort parking lot mentioned in “The People’s Guide to Mexico”.  Our fellow squatters were mostly retired American snowbirds with mammoth RVs unfit to stray from pavement, but we found one weathered Australian who considered the outback of anywhere his rightful home. Of course he'd driven highway 200 many times and gave us detailed reports.

On the plus side, much of the road was now passable gravel and there was even pavement on some parts.  On the down side, a twenty mile stretch along the cliffs of the Pacific coast was still nothing more than loose rock and the river near Caleta de Campo was still without a bridge. We would need to ford a rio peligroso in our fragile old van.


The Australian assured us that, though difficult, it could be done. His Range Rover got through on various occasions and an old school bus carrying supplies to the road crew did it on a weekly basis. However, the depth of the river flow was unpredictable and could make or break our chances of crossing.  We wouldn’t know what we were facing until we arrived so he gave us suggestions for various conditions.


If the flow was low, the biggest problem was to avoid getting stuck on the rocks which were actually small to medium size boulders. Momentum was our friend so he said to get a running start and floor the gas pedal all the way through.


In a worst case scenario, though, with a deep and fast stream flow, we first had to decide whether to even try it at all. Getting stuck mid stream would mean having to abandon the van and risk getting swept into the current ourselves.  If we did decide to go for it, he advised that we disconnect the engine fan belt so it wouldn’t spew water into things like the distributor, differential, and an alphabet soup of other essential parts.
We listened with interest but had no intention of doing what he suggested. Our tools amounted to one small adjustable crescent wrench and some twisted screwdrivers.  We didn’t even have a spare tire.  Our strategy for the river was: Check it out. If it’s a nightmare, turn around and hope to make it back.


Soon after leaving the last paved section of 200, we decided the words “bajo construcción” (under construction) really meant, “passable only by mountain goats or Sherman tanks”. Whoever drove that weekly supply bus must have discovered levitation. Gouged into the side of a nearly vertical coastal mountain range, this undeveloped stretch of Hwy 200 was nothing more than mounds of loose dirt and boulders poised to become an avalanche.  Views of the Pacific Ocean below were breathtaking, but our risk of falling into it was even more impressive.

Creeping at a top speed of ten miles an hour we finally arrived at the river and were overjoyed to find it flowing low. Without a doubt, we were going through.

Bob and Mary both opted out of taking the driver seat.  In fact, they insisted that waiting for me on the river bank would actually be helpful and I had to agree. Mary was subject to random panic attacks that were more nerve wracking than the road, and the only license Bob owned was from a cosmetology school.  Bob could not drive, a detail he neglected to mention before starting the trip, effectively making him a full time passenger.  Fording through a river in Mexico was my destiny. 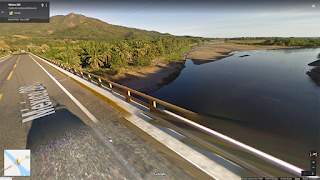 Aiming for a path with least obstruction, I revved the engine at the top of a small hill on the bank and headed straight across the stream. Clunking and churning, the Ford powered through the river with amazing grace.  It felt unstoppable, and then, with one loud thud, the right front tire landed in a hole. Rapid shifting between forward and reverse failed to free it.  I turned off the engine and rested my head on the steering wheel.


With impossible options flooding my brain, I hardly noticed the hand, a few inches from my face, knocking on the driver side window.  A smiling middle aged Mexican man was standing in the river beside the door.  “Hola señorita, nos puede ayudar!" (we can help!)
In a daze, I watched a swarm of Mexican men, all sizes and ages, pour into the river and surround the van with a precision that reflected much practice.  I was given a few simple instructions, turn on the engine, floor the gas pedal, and steer straight.  In a matter of minutes, this host of tropical angels lifted the van from the hole onto a patch of gravel where they pushed until traction shot it onto shore.
All I could do was repeat the word “Gracias” and shake every hand I could find while my stunned companions waded across to meet us.  Then, like a dream, the angels again disappeared in the lush tropical foliage.


The three of us continued our trip in awe struck silence. Finally arriving in Manzanillo, we rested in a palapa by the sea, ate aguacates con salsa wrapped in fresh tortillas, drank Tecate with lime, and toasted our belief in the infinite magic of Mexico.